“When my turn came, I said I hoped one day to be the dictator of an Islamic republic with nuclear capability; the others appeared shocked, and I was forced to explain that I had been joking.” 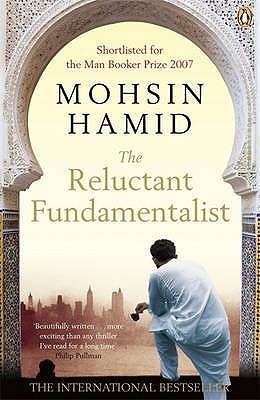 I’ve almost perfected the art of cooking and reading at the same time. I can’t do anything very complicated but I can throw ingredients into a pan, I can stir, I can wait for a sauce to simmer down, all with a book in hand and one eye on the page. At least, I used to be able to do this. Last week I was so absorbed in this book that I made an entire veggie spaghetti bolognese without spaghetti. Without. Spaghetti. That’s how distracted I was. It was only as I was getting out some plates to dish up my lovely sauce that I realised I was missing one of the main ingredients. What an idiot.

I can only blame the book. More specifically I blame the relaxed, conversational style in which it’s narrated for absorbing my attention so entirely. It’s written as a sort of one sided conversation between Changez, a young Pakistani man, and his unidentified American companion as they share a dinner in a Lahore restaurant. As they eat Changez describes his years at Princeton, his experiences working for a large corporation in New York and his romance with the beautiful but fragile Erica. The crux of his story comes in September 2001, when two hijacked planes collide with the World Trade Centre. Changez tells how in the aftermath of the attacks he found himself torn between his fascination with his adopted country and his anger at American actions towards his native home and his people.

As I said, it’s the narration I found most engaging about this novel. It’s direct, almost confrontational at times, and it asks some difficult questions about how far fear and anger influenced attitudes on both sides after the attacks. Hamid tries to show that Changez becomes first disenchanted but then increasingly hostile towards his adopted country as he considers that in pursuing his education and career he has become “a servant to the American empire.” In a longer book you might be able to convey this gradual change in all its complexity but there’s something missing here. I think maybe the deliberate parallels drawn between Changez/Pakistan and Erica/America were perhaps just too heavy handed to give this part of the novel any depth. It wasn’t helped by the fact that I couldn’t quite put my finger on what Changez really believed and how these views made him a ‘reluctant fundamentalist’. Although he’s a very personable narrator he was also very difficult to fathom at times.

In spite of my reservations I thought this was a surprisingly easy and enjoyable read given the emotive subject matter. I found myself feeling quite charmed by Changez, even on those occasions when he said things that I very much disagreed with. Without his gentle narration guiding the reader through the book I think the very tense ending would have had less of an impact and I wouldn’t have finished the book wondering who the real fundamentalists really are here.

10 thoughts on “The Reluctant Fundamentalist (2007) by Mohsin Hamid”

"She has read too many books and it has turned her brain" Louisa M. Alcott